All generations exercised out in the open with Robert Seligman 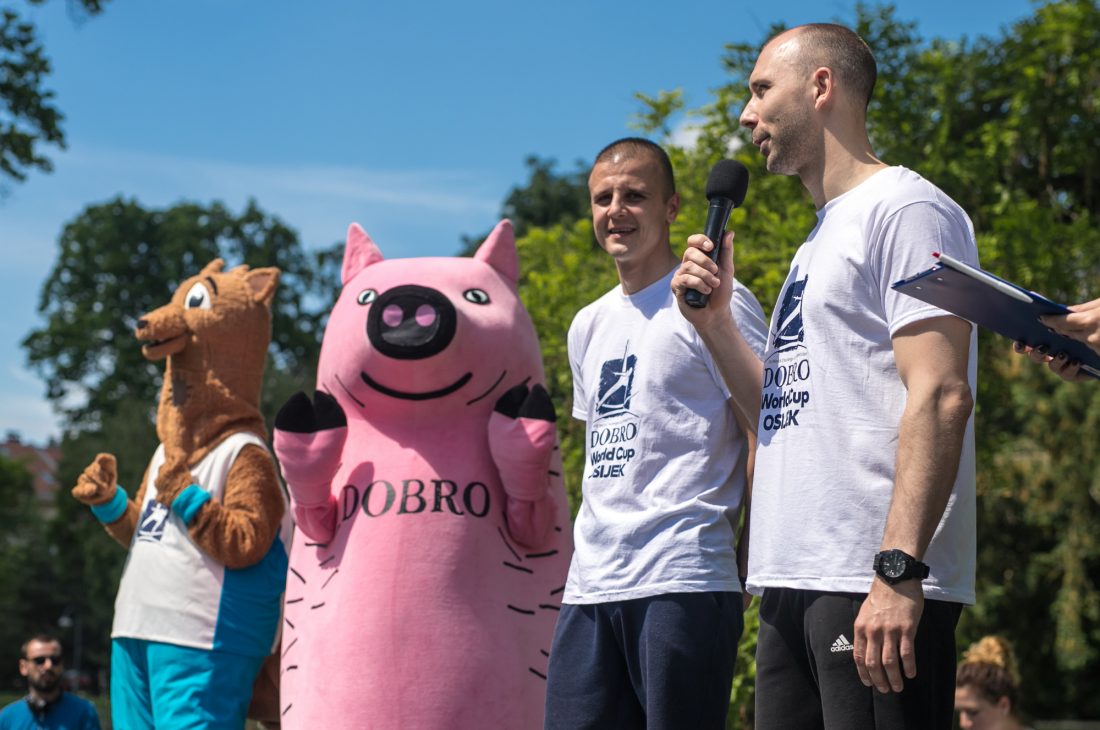 A beautiful sunny afternoon lured out many citizens who participate in outdoor exercizing, which became a traditional gathering as a part of the announcement of the DOBRO World Cup.

The youngest ones exercised on seven training grounds, and there was also a large number of elderly people gathered at the event which were included in the GOLDEN AGE GYM program under the guidance of the trainer Ksenija Livančić in the newly decorated Sokol Center. Besides, the goal of this gathering was not only to announce the forthcoming sports competition in the Arena Gradski vrt but also to promote a healthy lifestyle.

“A national research from two years ago discovered that two-thirds of people in Croatia do not practice any kind of sports activity. This is why the beautiful weather in the park in front of the newly decorated Sokol Center was an ideal opportunity for people of all age to exercise out in the open. Our goal is to indicate the importance of doing sports to children from a young age, and we are especially happy about the fact that a large number of the elderly also came to the event.” said Ivana Maltašić, the coordinator of the events of the DOBRO World Cup Osijek.

Before the beginning of the exercise, the attendants of the GYM DANCE program of the Gymnastics Club Osijek – Žito that has also been held over the last few months in the Sokol Center presented themselves to the ones gathered at the event. The leader of the event was a club trainer Tihana Lujev. Of course, the Croatian gymnastics representative Robert Seligman who is also the face of the DOBRO World Cup did not miss this exercise. All those who came to the beautiful Grounds of Petar Krešimir IV had an opportunity to exercise with one of the participants of the forthcoming competition that will be held in the City Hall.

“I must admit that I can’t wait for the beginning of the competition for which this year I have the ambition to climb to the highest podium in front of a home audience. My heart truly filled with emotions when I saw so many fellow citizens, from the youngest ones who exercised on the training grounds to the elderly. I believe that all of them recognize gymnastics as well as a way of life. Let this joint training of ours be a big step towards a healthy lifestyle.”, said Seligman, the face of this year’s World Gymnastics Cup in Osijek 2019.

All the activities before and during DOBRO World Cup Osijek are organized by the Croatian Gymnastics Federation and the Gymnastics Society Osijek – Žito with the help of the main sponsor the Žito and the brand DOBRO and the City of Osijek, the Osijek – Baranja County, the Central State Office for Sport and the Croatian National Tourist Board, and with the organization of the event Excersing Out in the Open the company Decathlon also helped.