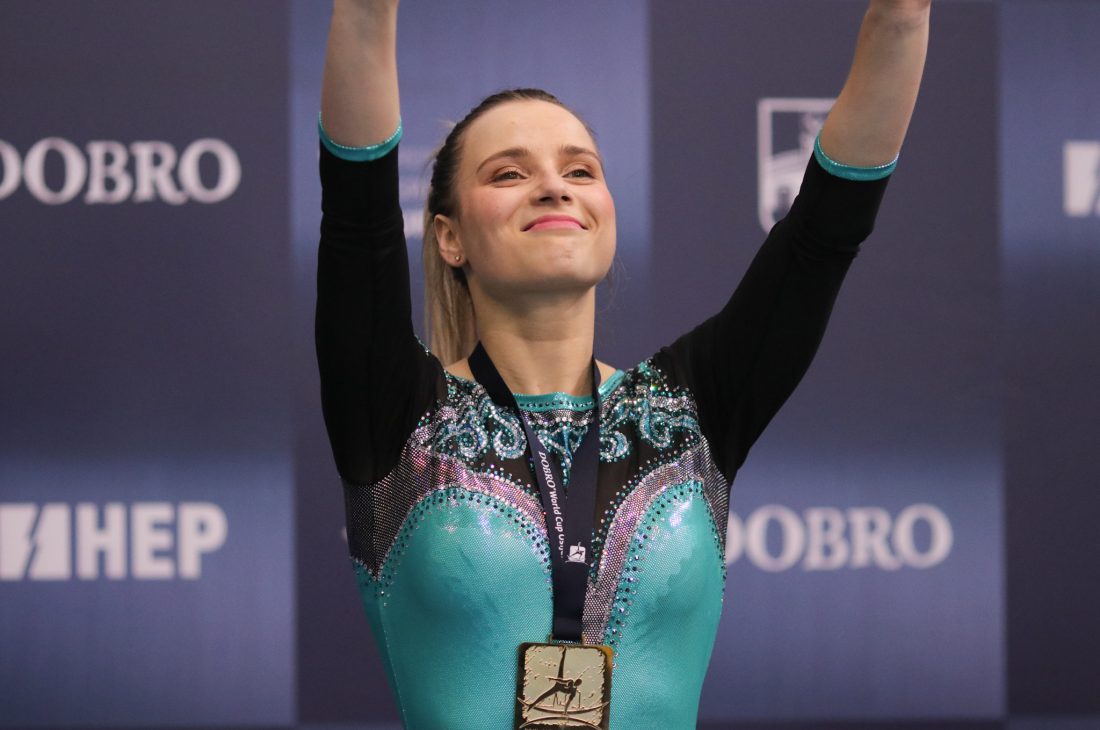 On the second day of the finals of the DOBRO World Cup Osijek 2019, one of the best Croatian gymnasts Ana Đerek brought joy to the large audience in the City Hall by winning another gold medal. Ana performed her routine for the finals in Floor brilliantly and scored a ranking of 13.033 which was more than enough for her to win the first place.

For Đerek, this was the third time to perform in front of an audience in Osijek and it is definitely her best result up to now. She won fourth place in the today’s finals in Beam and she exceeded her best result up to now which was the fifth place in Beam from 2015. For winning the medal in this discipline as well, she missed only 0.034 points this time. However, there is no reason to be unsatisfied. The gold medal in Floor at the World Cup in Osijek is a second gold medal in Ana’s career after she won the gold medal at the competition in Baku last year.

“I entered the finals first, so there was a large possibility that I remain first, but I really did not think that I would win. I did not think that my first medal will be gold. I am really thrilled! Out of four difficult routines, all of them were really good performances. And I even performed in the finals in Beam better than I did in the qualifications. I managed to remain focused in Floor and to do it again. I am really satisfied and proud of myself. The audience here is unbelievable. The emotions that you feel at this competition you truly only experience once in a lifetime.”

The second place in Floor won Angelina Radvilova from Ukraine with the same ranking, but who despite a higher start ranking had a weaker performance than Ana. Alexandra Mihai from Romania won the bronze medal (12.933). In Beam, Angelina Radvilova (13.333) from Ukraine won the first place again, and the second and third place won the two gymnasts from Romania, Carmen Ghiciuc (13.100) and Alexandra Mihai (12.667).

The second Croatian representative in the today’s finals was the current European vice-champion Tin Srbić, who performed his new routine in the finals in Bars, which should improve in the second part of the season just in time for the World Championship in Stuttgart. This was Tin’s first performance after he won the silver medal at the European Championship in Poland, but unfortunately, he did not manage to win his third-in-a-row gold medal at the this year’s edition of the World Cup in Osijek because of a fall at the beginning of his routine. He earned a ranking of 12.933 which put him in the sixth place.

“Honestly, this is gymnastics and I make mistakes rarely, but this just shows that everyone can make a mistake and that this is something that is normal. I really enjoy performing in front of a packed hall, the audience is what gives me the most energy. The problem is when a gymnast is not in his best shape because even the audience is of no help then. Now I have experience and understood this. I set my expectations too high by trying to perform the hardest routine. I fell, and when a gymnast falls at the beginning of his routine it is really hard to continue the routine. I am glad that I made it to the end of the routine without any more falls. Actually, I am satisfied that I managed to gather the courage and perform the hardest routine.”

At the this year’s edition of the DOBRO World Cup in Osijek Croatian national team had six big final performances out of which the gymnasts Robert Seligman in Pommel Horse and Ana Đerek in Floor won gold medals.