Benović, Ude and Korent in the finals of the DOBRO World Cup in Osijek! 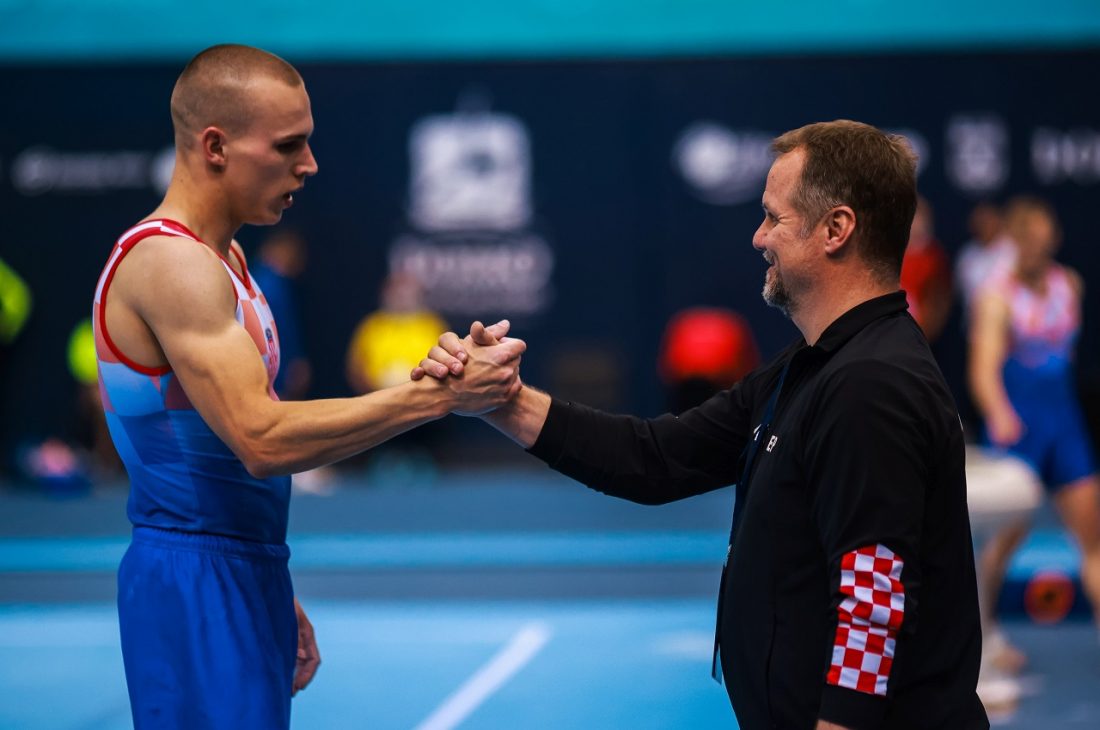 Aurel Benović on the Floor, Filip Ude on the Pommel horse and Tijana Korent on the Vault will be fighting for medals on Saturday at the DOBRO World Cup in Osijek!

On the first qualifying day in the sports arena Gradski vrt, these three Croatian national team members performed excellent exercises on their apparatuses and opened the competition in Osijek in a great way.

Aurel Benović, last year’s European runner-up on the Floor, delighted in his city today and announced a replay of that Championship, but also of the World Cup in Varna from 10 days ago. Namely, in both competitions he had “duels” with the great Israeli star Artem Dolgopyat, who beat him at the European Championships, and Aurel fought him back in Varna. Today, Artem won the qualifications (15,400), and Aurel reached the finals with 2nd place (14,750).

„I am pleased with my performance. I went for start 6.3, like at the recent WC in Varna in the qualifications, a slightly easier variation of the exercise. I did a fantastic job, it became a constant. An exercise that I do as a standard in both training and competitions. There were minor mistakes, but it is important to remember that only two years ago I entered the senior competition, so I got to the competition level very quickly. In agreement with coach Mađarević, I will probably go with a stronger start in the final, 6.5. In the finals, I want to do the best possible exercise and repeat Varna. Win first place again and beat Dolgopyat again. I am glad he came to my city again. I did not expect it considering that the Olympic Games are approaching. This year I will also perform on the Vault in Osijek. I did it seven years ago when I was still training all-around. Now I have started it again, but it has not yet reached a level like on the Floor, but I am already doing very solid Vaults with which I can compete for the World Cup finals. I am not sure yet if it will be enough for medals, but for the finals it certainly will. I am sorry that there will be no spectators in the finals in Osijek this year, but I hope that next year the situation will be better and that the sports arena Gradski vrt will be full again.“

Second place in the qualifications was achieved by Tijana Korent with a score of 13,375. Only Latvian Elina Vihrova (13,450) was better.

„I am satisfied with my performance in the qualifications. I entered the finals as the second. I must admit that second place is putting pressure on me for Saturday, but I believe that the finals will go well, that I will do the best I can. I can still make some improvements. I have another harder jump, but I will see how I will feel given the minor back injury. It would be nice to win a medal here. It would be the first time after a long time, it is always nice to perform in Osijek, it would be nice to end this part of the season with a medal. Unfortunately, I can’t predict what it will be like on Saturday. The competition is fierce, but today the girls did bit easier exercises. Girls are getting in shape, the Hungarian girl is in the third weekend of the competition, so today she decided to go a bit easier, but I know that she can do way better. I expect much better results in the finals on Saturday.“

“Considering everything, I am very pleased. I went for an easier exercise today, 5.6, though, I needed 6.1, but I have a shoulder injury and I haven’t been able to get in best shape yet. Thank God, I have a clean workout so I can afford a bit weaker start. In the final I will probably go for harder exercise, we must agree with the coach and arrange another exercise. I did not bother with the competition, I used to do it before, but then I started combining and eventually it turns out the opposite. Like this year at the European Championships. Out of seven of us, eight made a mistake so nothing needs to be planned.”

„I am not satisfied with the result because a couple of mistakes were made during the exercise. I am pleased that the exercise was done from start to finish. I made a mistake in the end, I made an easier jump so that in the end the initial result I planned to make did not turn out, but for the first time in Osijek it is not bad, and I can’t wait to come back. What happened in Osijek this year is the mini World Cup. Osijek is usually praised by everyone that it is excellently organized. I am thrilled. I have been trying for five years, there’s Ude and Seligman and when one of them gives up, then there was always the other guy in front of me. I was spectator at the first World Cup. A friend of mine had a grandmother in Osijek, so we came to the competition. I was still a cadet and wanted to perform in Osijek one day. And here, my boyhood dream has finally come true.“

Our second representative on the Floor, Filip Boroša, at his premiere in Osijek was 28th with 13,300.

„I am very happy that I performed at home field for the first time. I justified my coming here, I did exercise 5.3, and the plan was to start 5.5. I made small mistake at one jump. But never mind. I am satisfied, next year I will intensify the exercise and I hope for the final. Aurel was great. I was speechless. I saw the exercise, all credit to him!“

Christina Zwicker finished 13th with 11,600 points due to fall on the Uneven bars

„I started the exercise very well, but the element before the jump unfortunately I made a mistake, I fell off and that resulted in 13th place. The harder part, the new part of the exercise, with two new elements, I am happy with that, and this afterwards is a matter of rehearsing. Tomorrow the Balance beam is waiting for me, I will do my best. I hope it will be the way I want it and the way I did in training.“

Sara Šulekić in her first performance in Osijek was 17th on the Uneven bars (11,100)

„This is my first time as a senior at home. I had a few senior competitions this year, I am slowly catching it up. Today I was doing an old exercise that I am sure of, that I do usually, but I made a mistake at the end of the exercise and it costed me of higher result. Still, I’m glad for what I did before that mistake.“ 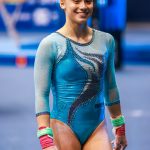 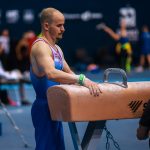 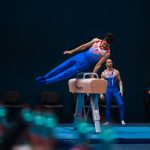 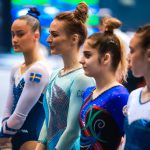 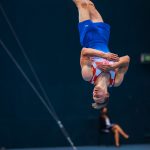 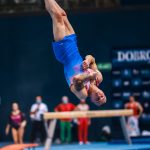 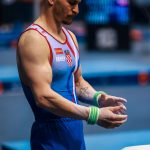 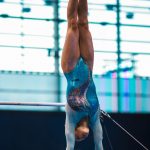 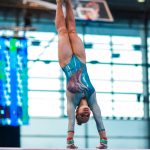