Seligman ranked first in Pommel Horse, Benović will perform in the finals for the first time, Tkalčec standard result! 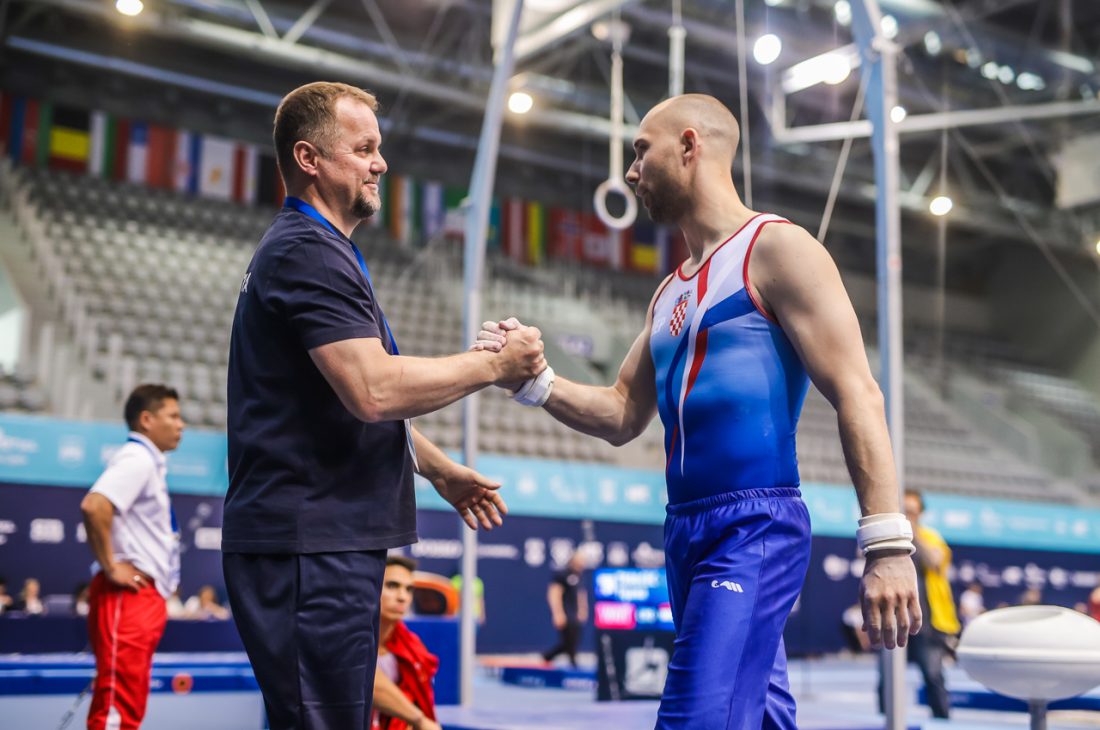 Robert Seligman and Aurel Benović have made it to the finals on Saturday in front of their home audience in their hometown! Robert, our trophy winning representative, performed his routine in Pommel Horse with ease and received a ranking of 14.250. He ranked first in the qualifications. He is the only gymnast that received a ranking higher than 14 in this discipline today. The second-ranked was Nikolai Kuksenkov from Russia (13.900), and the third-ranked was Michael Sorokine (13.450) from Izrael.

„It was truly fantastic! This was one of my most still routines up to now, out of all the routines from the 11 World Cups in Osijek. I always say how I feel the most pressure and that it is the most difficult for me to perform at home. Honestly, I don’t like to remember that, because I would like to prove myself in front of the audience. Today was great, I was completely calm and everything went as I planned. I would like to climb the highest podium at home, although that will be no easy task because the two Russian gymnasts will definitely intensify their routines. I will do that also. It will be an interesting final competition, just as I have expected. I believe that with the support from the beautiful audience from Osijek, that supports not only us but also other gymnasts, I will give it my best on Saturday. I just need to rest a bit and be completely calm.“

The young Aurel Benović (19) is the second gymnasts from Osijek who proved himself to the audience and who made it to the finals. This will be his first finals competition after winning the ninth place last year. Aurel finished the qualifications fourth after his excellent routine for which he was ranked a high 14.100. The first in Floor was the excellent Artem Dolgopyat (14.900) from Izrael, the second Tomas Gonzalez (14.400) from Chile, and the third was Kiril Prokopev (14.350) from Russia.

„I am very satisfied with the way I did my routine and that I made it to the finals. Since I had a more serious injury after the European Championship I did not have time to prepare… But I still did the best I could and the World Cup in Osijek was nearing. I managed to get back into shape, perform a clean routine with a 5.7 start and make it to the finals as the fourth competitor. I am really pleased with my performance. I did my performance from the beginning to the end without making too big mistakes. I know that during the finals the audience goes mad, so I think this year will be a real spectacle!”

Tijana Tkalčec, the most experienced Croatian gymnast from Čakovec, finished fourth after today’s qualifications. At her sixth performance at the DOBRO World Cup Osijek, Tijana won the ranking of 13.275 (13.250 and 13.300) for her already well-known routine.

„I am pleased with my performance, although today my performance was not the best I could do. At the European Championship, I got higher ranking for the same routine, but it doesn’t matter because it was enough to get me to the finals which was the most important thing to me, to be able to perform in Osijek in front of a home audience. It is really a special feeling and I am glad that I get to show my new jump to the Osijek’s audience in the finals and that I have this opportunity to show what I can do. Maybe I will even make it to the podium if I perform that jump well.“

In the final competition on Saturday, Tijana will be aiming for her third medal from Osijek. Unfortunately, our second representative from today’s qualifications in Vault, Ema Kajić will not have the opportunity to join her in the finals. Ema’s performance today earned her eleventh place (12.650)

„Unfortunately, they did not approve of my second jump because I did not rotate my legs completely which was from the start a four tens of seconds lower ranking. If I had done that the way it was supposed to be done, I would definitely be in the finals. I am not very disappointed, but the greatest disappointment is when you know you could do something but you did not make use of the opportunity.“

The first place of the qualifications in Vault won Teja Belak (14.250) from Slovenia. The second was Angelina Radivilova (13.575) from Ukraine, and the third was Tjaša Kysselef (13.525) also from Slovenia.

The qualifications for the other disciplines will be tomorrow. The women will be competing in Beam and in Floor, and the men will perform in Bars, in Links, and in Vault. Out of the Croatian gymnasts in front of Osijek’s audience will perform Tin Srbić, the current European vice-champion, Ana Đerek, and Christina Zwicker.