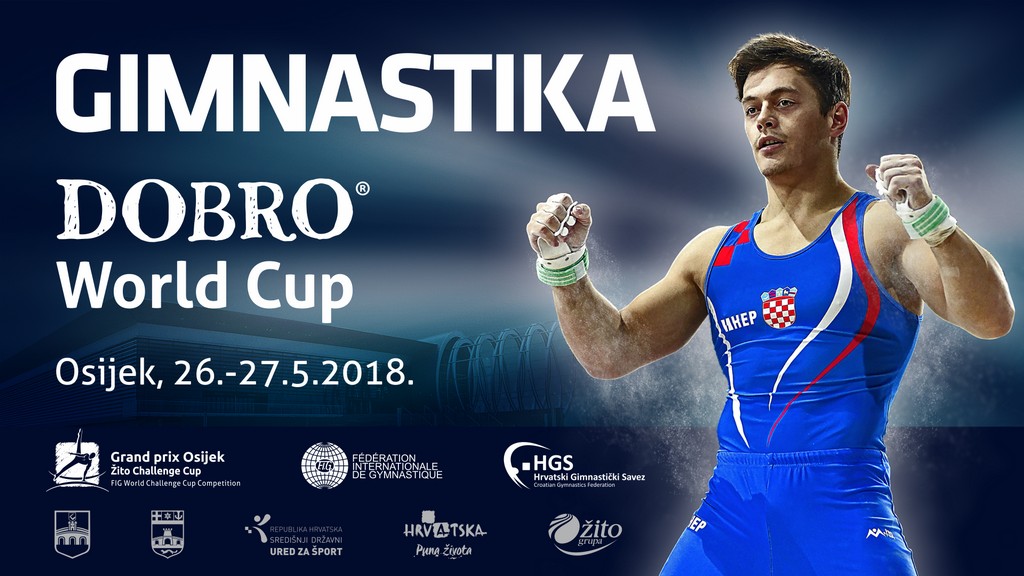 This year, the tenth, jubilee, edition of the World Gymnastics Cup will take place in Osijek’s Gradski Vrt between 24.05. and 27.05. as another opportunity for the world’s, as well as Croatia’s, best male and female gymnasts to come together.

The competition that had its debut in 2009 is one of today’s best organized official stages of the FIG (International Gymnastics Federation) tournament and has since welcomed more than 1500 competitors from 65 countries, among them some of the worlds’ all time bests. The tenth World Gymnasts Cup has been spruced up with a name change, so this year Osijek will host the DOBRO World Cup (carrying the name of the general sponsor of the Žito Group competition, DOBRO).

“This year the tenth edition is being held and with it there will be a number of sports novelties as well as announcements. To be the host of one of FIG’s official competitions is an exceptional honor since it places Croatia right up there with Europe’s and the world’s capitals – the organizers of the stages of the World Gymnastics Cup such as Melbourne, Doha, Paris or Baku. So far, 34 gymnastics teams have announced their participation, and even the presidents of the FIG and European Union of Gymnastics, Morinari Watanabe and Farid Gayibov, are in attendance,” said Stevo Tkalčec, head of the Croatian Gymnastics Federation.

This year the DOBRO World Cup in Osijek will be riddled with numerous events which will over the course of May announce this year’s gymnastics spectacle in Osijek.

“This year’s edition of the World Cup is to be as attractive as ever, and therefore the entire production of the finals will be at the highest level of quality yet. In May, tens of events will be held in order to announce the tenth World Challenge Cup in Osijek such as concerts, sports events, or socializing with the Croatian gymnastics team. What we look forward to the most is the public announcement of the starting numbers which will allow the public and the fans to meet the gymnasts who win a spot in the finals,” the director of the tournament, Vladimir Mađarević, pointed out.

The finals of the tournament will be held on 26.05. and 27.05. The organization of the 10th edition of the FIG World Challenge Cup, along with the City of Osijek, the Osijek-Baranja County and the Žito Group, is also being supported by the Central State Office for Sports and the Croatian National Tourist Board.

All news related to the organization of the World Gymnastics Cup, DOBRO World Cup in Osijek, can be found on the event’s official webpage, which has also been given a new look (www.osijekgym.com).