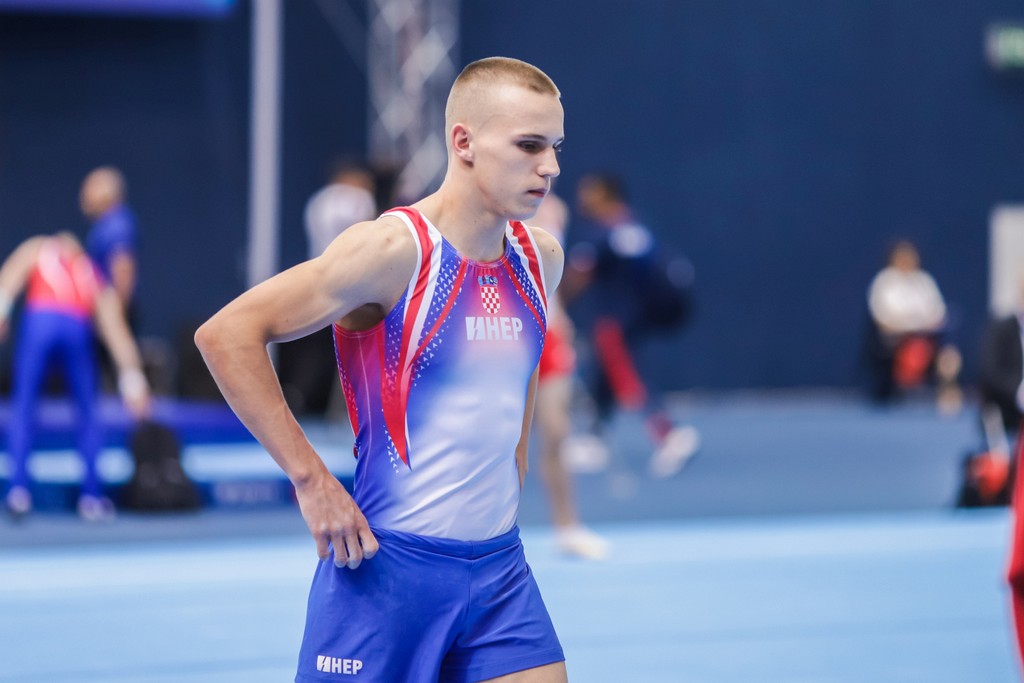 The first day of the qualifications at the DOBRO World Cup 2018 Croatian gymnasts have ensured three places in the finals. In the finals, on Saturday, from 5 p.m. we will see Filip Ude and Robert Seligman perform in Pommel horse and Tijana Tkalčec in Vault. Ude won second place (14.333) in the qualifications, with only one other contestant with better result and that was Lee Chih from Chinese Taipei (15.000). Third place was won by a Slovenian Saša Bertoncelj (14.500). Robert Seligman’s performance was excellent until the very end when he made a mistake. However, the final 13.867 score was enough for the finals.

A place among the top eight was also ensured by Tijana Tkalčec. In the Vault discipline, she took the sixth place with an overall grade of 13.383 (13.433, 13.333). The best in Vault was the legendary Uzbek Oksana Chusovitina with a score of 14.184 (14.267, 14.100). The second Croatian representative Ema Kajić in the Saturday’s finals will appear as a reserve. She took the ninth place with an overall score of 12.934 (13.100, 12.767). A place in the finals was almost won by the young Aurel Benović from Osijek. At his first performance at the World Cup in Osijek, the member of the Gimnastic Association Osijek – Žito took the ninth place with a score of 13.933. The best grade was given to the Russian Kiril Prokopev (15.200).

Tijana Tkalčec:
– I have accomplished the goal for which I came to Osijek, but honestly, I was not expecting a place in the finals. Everything fell into place and I successfully performed all the elements. We took a safer routine because I am still afraid how my kidneys, with which I have problems, would respond. I will also perform this safer combination in the finals. I do not really believe that I deserve more than the fifth or the sixth place since other girls have stronger routines.

Ema Kajić:
– I am a little disappointed. I was only one place away. That’s sport, ups, and downs. Next year is going to be better. I started my first jump a bit lower, while in the second jump I had a weak ending. Even though I often end up ninth, last year I managed to come in seventh, and I am hoping that next year will be the right one for me.

Aurel Benović:
– I am very pleased considering this was my second performance ever at the World Cup. The ending was worse, so I lost here a couple of tens. I wanted to bury it all but I could not because of the pressure of the competition. I gave in really lot of energy into my performance, but I still missed very little to enter the finals.

Filip Ude:
– I did not set any goals, finals or medals for myself. It was important for me to calm down and do the best I could. It was not one of my best performances, but I did not fall. In the finals, I will try to do my hardest routine because there is little time until the European Championship so it needs to be tried. Up until the performance I was nervous, the second-to-last attempt at the warm-up was good, I calmed myself down and it turned out good in the qualifications. If I perform the hardest routine in the finals I can compete for the medals.

Robert Seligman:
– I am very pleased for entering the finals. I am in great shape. The performance fell into place despite these mistake at the end, I am definitely not doubting it. Today I showed my top performance routine. The routine starts with 6.1 which is high and with which I am planning to compete for the medals in next two to three years. In the very end, there was a moment of loss of focus. Honestly that ending I would hardly accept. The finals were a reward for me and now I have to confirm it on Saturday.