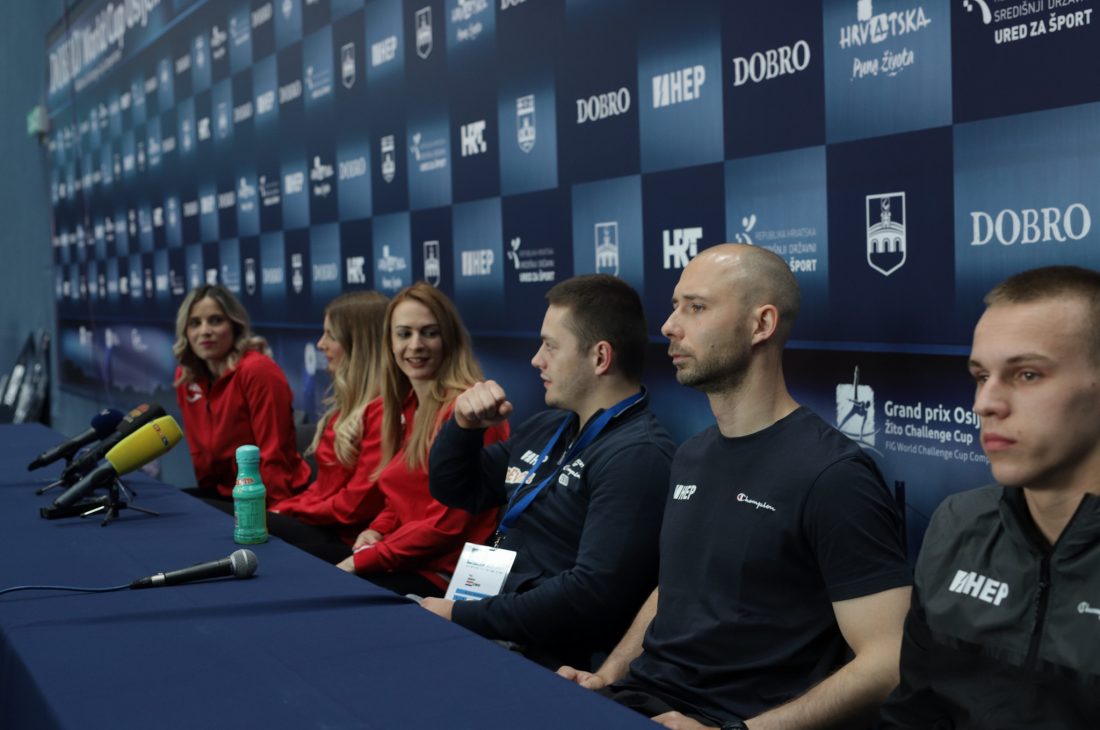 From the 22nd to 26th of May at Osijek’s City Hall, the 11th edition of the World’s Gymnastics Cup will be held. The DOBRO World Cup, as it is named, will be the place for seven Croats, four women and three men to try to win their place in the finals.

On the 23rd of May, the first day of the qualifications will be held. The program starts at 3 pm and we will be able to see Tijana Tkalčec and Ema Kajić on vault, Robert Seligman on pommel horse and Aurel Benović on Floor. Day after, on the second day of the qualifications, also from 3 pm, for the place in the finals will be running Ana Đerek on Floor, Christina Zwicker on Beam and Tin Srbić on High bar.

The weekend’s finals start from 3.45 pm on Saturday and 3 pm on Sunday. Saturday is reserved for Floor, Pommel Horse and Parallel Bars for men, and Vault as well as Uneven Bars for women, while Sunday’s program will begin with Rings, continue with the High Bar, and have their grand final with man’s Vault and woman’s Floor and Beam.

Ana Đerek:
Last year I missed this stop of the World Cup because of an injury and that’s why I’m truly happy about coming back this year. I’ll perform on Beam and Floor, and if the plan works, the results will come, that’s what I’m sure of. Keep your fingers crossed!

Ema Kajić:
It’s such an honor to perform in front of the domestic crowd. The organization is amazing, the gym is beautiful and also the atmosphere is always stunning. This year I’ll be performing on Vault. I want to do my two jumps as best as I can. Looking forward to the finals.

Tin Srbić:
I’ve had a tough first part of the season and I’m glad that I’m able to compete in Osijek. It’s my obligation to come to Osijek because it’s home, and it is one of the best World Cup competitions. The competition is a bit younger this year – lots of young gymnasts are competing and they want to represent their abilities in the best ways possible. I have two consecutive wins, of course, I’m hoping for a third one to crown the cycle. I’m sure the crowd expects me in the finals. I have to say that I’m feeling sorry that my colleague, Anton Kovačević, isn’t here because he wasn’t able to recover after a long-term injury; as well as that of Filip Ude. That’s why Robi, Aurel and I will try to achieve the best results this year in Osijek.

Robert Seligman:
As someone who is not only a competitor but also a host, I would like to thank the City of Osijek, the Osijek-Baranja County, the Croatian Tourist Board, the Central State Office for Sport, and I would like to express my gratitude to Žito Group and their brand DOBRO. Without them, the competition could not be at such a high level. I would also like to thank the firm Športski objekti for giving this beautiful hall exclusively for the benefit of our gymnasts. Here, I really try to please all of my colleagues in gymnastics. I’m living gymnastics 24/7. I believe that this will be another unforgettable competition. The hall is beautiful, and the signal via satellite will be sent into the world to 550 million households. It is a great honor to be part of the national team. Of the seven of us, we will certainly have at least four to five finals. Of course, Tin Srbić is the number one for me. I am convinced that he will again bring the brightest medal. I still have not won at home. This is the 11th edition and also a big encouragement to dominate in the overall standings.

Aurel Benović:
My expectations are higher than last year when I was two tenths away from the finals. I have an even stronger exercise with an even bigger start, I want to do it as cleanly as possible so that I can compete in the finals of the World Cup. It would be awesome to compete for the first time in front of my audience at home.

Just a day before the DOBRO World Cup 2019 bad news arrived directly from the office of the Croatian Gymnastics National Team. In recent years, the best Croatian gymnast and a silver medalist at the Beijing Olympics 2008, World Championships in Nanning in 2014 and the European Championships in Lausanne in 2008, Filip Ude canceled his performance in Osijek. He was injured in his last training before coming to Osijek.

Unfortunately, Filip has had to cancel the performance. After training on Wednesday night where we simulated performance in Osijek, he injured his finger. The injury is not terrible, a splint, but it’s followed by ten days of rest and therefore he is not able, despite a huge desire, to perform in front of a home crowd. So instead of his arrival in Osijek, where the plan was to do half of the all-around competition, on three devices, he will have to follow rehabilitation and hopefully quickly return to his training, said Mario Vukoja, one of the coaches of the Croatian gymnast.

Filip, we wish you a fast recovery and an even quicker return to competitions.

THE WEEKEND AHEAD SPICED UP WITH GYMNASTICS AND EXCELLENT ENTERTAINMENT

All information about the competition, which will be held at the City Hall from the 25th (15:30) to the 26th ofMay (14:30), can be viewed at www.osijekgym.com as well as on Facebook and Instagram on the official competitions accounts, Gymnastics club Osijek Žito and Croatian Gymnastics Federation. We add that, besides the sports program, we have announced a rich entertainment program as part of the FEELGOOD WEEKEND Festival, where Neno Belan & Fiumens (Friday, May 24) and Massimo (Saturday, May 25) will perform.