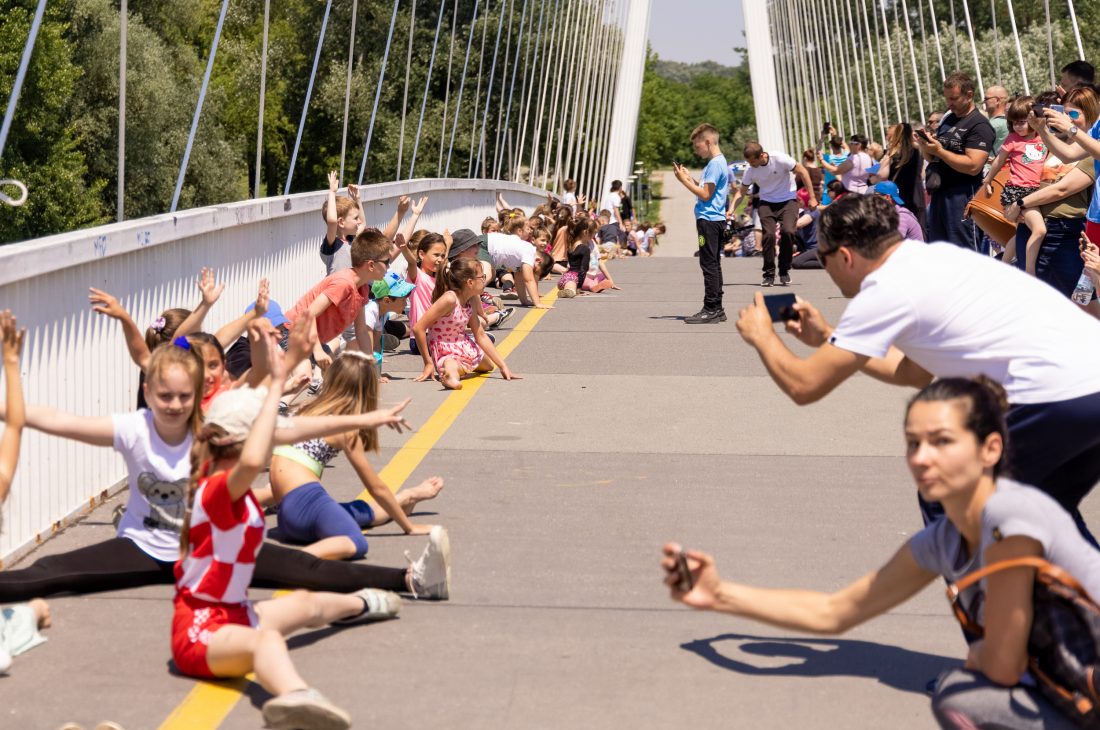 On Saturday, June 5, in beautiful sunny weather, the organization of the Longest Split in as many as 6 Croatian cities was successfully carried out, all with the aim of announcing the 12th edition of the DOBRO World Cup Osijek. Gymnasts, but also ordinary citizens gathered in Osijek, Čakovec, Zagreb, Split, Rijeka and Zadar and made “a human Split” in the total length of as much as 1,349 meters!

The “human Split” was a great announcement for the upcoming edition of the Gymnastics World Cup – DOBRO World Cup, which takes place from June 9 to 13 in Osijek’s sports arena Gradski vrt, and which is attended by almost 200 athletes from about 30 countries.

The organization of this announcing event was readily accepted by gymnastic clubs from the mentioned cities, which once again showed unity in the desire to bring sports and recreation closer to everyone – from the youngest to the more mature citizens. In Osijek, Čakovec, Zagreb, Split, Rijeka and Zadar, along with the trainees, there were also famous gymnasts with one common message: We are glad to be a part of this great sports initiative!

Aurel Benović, Gymnastics Club Osijek – Žito – Osijek:
„I can say that I am very happy to see how many young people responded to this great event which is also a good promotion for upcoming DOBRO World Cup – World Gymnastics Cup in Osijek which is one of the best gymnastics stages in the world. You can follow us this year through small screens, but I hope that next year the situation will be much better and I hope to see you again in the sports arena Gradski vrt!“

Mario Vukoja, Gymnastic Club Marijan Zadravec – Macan – Čakovec:
„We can conclude that the longest split succeeded, especially in Čakovec. We made a split 528 meters long, and we are especially happy that we were joined by citizens and representatives of other clubs, as well as the County ruler, the Mayor and others. The people of Međimurje have shown that they love sports and that Čakovec is not without reason the European City of Sports in 2021 and we have already announced next year so this can become a nice tradition.“

Ana Đerek, Gymnastics Club Marjan – Split:
„In Split, „the human split“ was 260 meters long and I think everything is very well organised, it is also great announcement of the World Cup next week. It was great for me because all the gymnastic clubs from Split gathered, but also other sports teams. I love when people talk about gymnastics, especially now during the World Cup. I hope to do my exercises in Osijek as before this split in training. I am looking forward coming to Osijek as always. This is one of my favorite competitions and I hope that all Croatian competitors will do well and be satisfied.“

Diana Lukašić, Gymnastics Club Rijeka – Rijeka:
„136 of us gathered and we occupied 212 meters of our Rijeka breakwater, known as Molo longo. We thank the Port Authority who provided all the conditions for the split. The atmosphere was as hot as the asphalt and everyone was overjoyed.“

Josip Morožin, Gymnastics Club Salto – Zadar:
„It is extremely important to us and we are proud to participate in an event like this that promotes a healthy lifestyle, sports and gymnastics and caring for your body. We plan to surround the entire Krešimir Ćosić Hall in the future, and we are already looking forward to the World Cup in Osijek next weekend.“

Filip Ude, Gymnastics Club Marijan Zadravec – Macan – Čakovec:
„I am glad that the athletes responded and I am glad that we can promote gymnastics as one of the basic sports intended for everyone – from children to adults.“

Tin Srbić, Z.T.D. Hrvatski Sokol – Zagreb:
„The split has spread throughout Croatia and it is a very nice announcement for DOBRO World Cup in Osijek. Besides us, Croatian representatives, athletes from many countries are coming because there is not much competition given the situation in the world. It’s one of the most important World Cups for all of us going to the Olympics and I’m really looking forward to it. I’m in good shape and I’m looking forward to a good performance, and you can watch us on Croatian television next weekend.“

Marijo Možnik, President of the Croatian Gymnastics Association:
„This year, the people of Osijek were joined by gymnasts from five other cities in Rijeka, Zadar, Čakovec, Split and Zagreb to symbolically announce the World Cup to be held in Osijek on June 9-13, where 150 athletes from 30 countries will compete. Unfortunately, without an audience, but with a broadcast on Croatian television, world, Olympic and European medalists will perform, as well as the best Croatian gymnasts led by Olympians Tin Srbić and Ana Đerek“