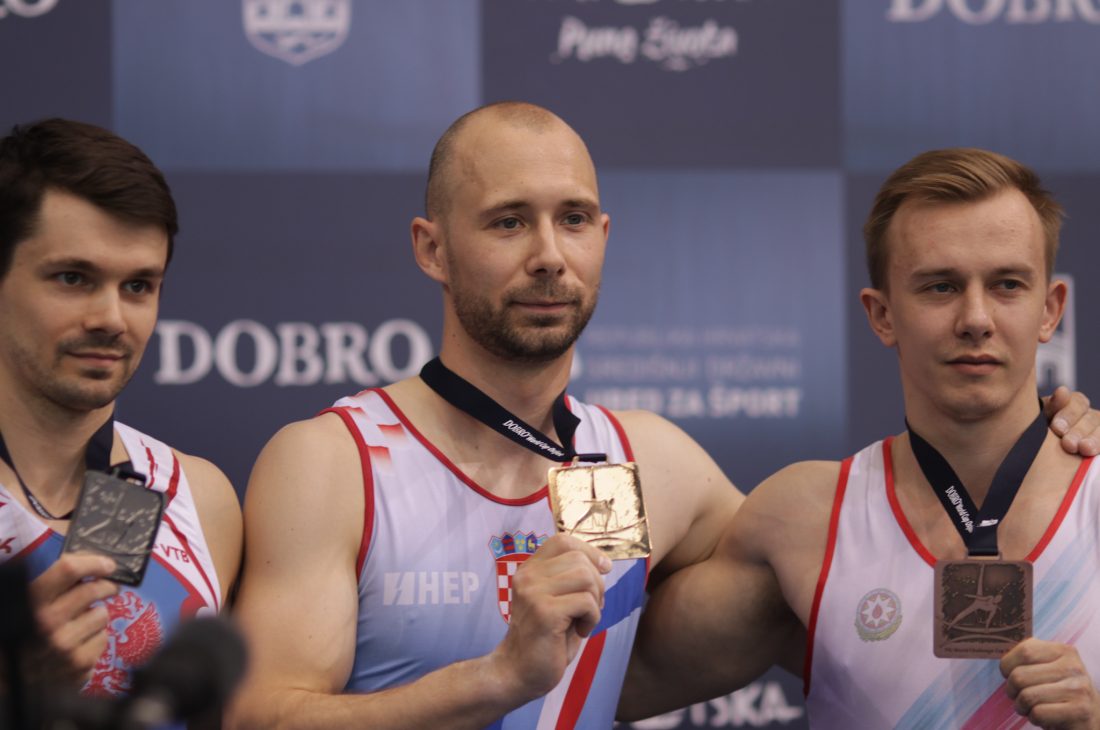 On the first day of the finals of the DOBRO World Cup Osijek, the City Hall echoed the name Robi. The Croatian representative, the host and the face of the World Cup in Osijek, Robert Seligman fulfilled his big dream and won the gold medal with his routine in Pommel Horse.

After winning the first place at the qualifications, which gave him hope that this situation might be repeated in the final competition on Saturday, Seligman performed his routine with calm in today’s finals. For his routine, he earned a ranking of 14.533 and won his first gold medal in Osijek. After 11 years of his many performances in his hometown, 2019 was the year predetermined to be the fulfillment of Robert’s big dream, which was to stand on the highest podium in the City Hall. Nikolai Kuksenkov (14.300) from Russia and Ivan Tikhonov (14.00) won the second and the third place.

“What can I say, I am thrilled. I gave it my best. This is my current maximum and this is what I have been practicing at my training. As I already announced, I had a feeling I might win this year. Now that happened, I feel relieved. I am aware that I am 33 years old and that I will be performing and fighting for the podium for another few years, and I would be truly sorry to not have won a medal in my hometown. I did not plan it too much, although the situation was pretty clear before my performance. Today’s routine was really good, I have nothing to criticize and I am thrilled because of the medal,” said Seligman moments before he was awarded the gold medal.

Alongside Robert, at the today’s competition performed another two Croatian gymnasts – Tijana Tkalčec in Vault and Aurel Benović in Floor. Tijana won the fifth place and Aurel came in seventh. This concluded the first finals day of the DOBRO World Cup Osijek.

“The ranking today was a little lower than I am used to, but I did perform the new jump that I still have not practiced enough. I still need more experience with this jump at competitions in order to be able to perform it properly and so that the rankings are higher. When I return to Čakovec I will continue to practice this jump, because I will travel to Koper already on Wednesday where I hope that I will perform the jump properly and that it will be enough to get me to the final competition. It is a special feeling to perform home, in front of Osijek’s audience that is truly wonderful and that cheers for all the athletes no matter where they come from,” said Tijana Tkalčec after her performance in the finals.

The first day of the final competition in Osijek will be continued with a range of entertainment content within the second edition of the Gastro&Wine&Music festival FEELGOOD WEEKEND. All the visitors of the event can expect a selection an excellent food and drink, and at 9 p.m. there will be a performance of the outstanding Massimo. On Sunday, the second day of the final competition will start at 2.30 p.m. Croatia will have 3 representatives in the finals. Tomorrow Tin Srbić in Bars and Ana Đerek in Beam and in Floor will have an opportunity to expand their collections of their medals won in Croatia at the DOBRO World Cup Osijek.