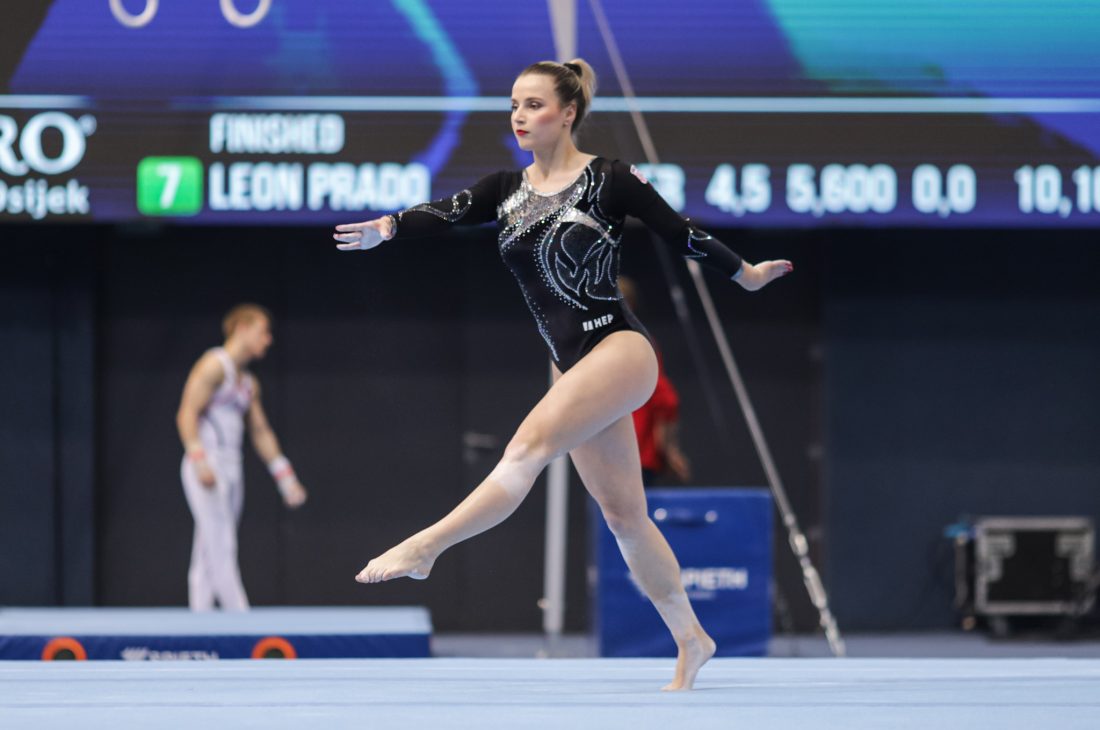 At DOBRO World Cup 2019, Croatia will have five representatives in the final, and for the medal fight, they will start on six devices. After Tijana Tkalčec (Vault), Robert Seligman (Pommel Horse) and Aurel Benovic (Floor), on the second day of qualification Tin Srbić and Ana Đerek found their place in the finals on Floor and Beam. Srbić performed his exercise on a sovereign basis, with the best score on the High Bar (13,950), as well as Ana Đerek on the Floor (12,700). She also entered the finals on Beam, coming sixth  (12.700). Christina Zwicker took 17th place on Floor (11,400) and 25th on Beam (9,450) and did not enter the finals.

I’ve done a pretty light exercise, I’ve never performed with such a start mark because I did not want to risk the difficult exercise because I knew that if I do this well that it’ll be enough. It was obviously enough since I was first. I am happy because I could not catch the continuity of the training from the European Championships, I had military training that kicked me out of the rhythm and the pain in the elbow. I am happy that I got this out, but on Sunday I will go with another exercise and will try to win the gold medal. Before each competition, my coach and I determine the exercise that I’ll be doing in the qualifiers and in the final, but this time, given the situation, we did not so specify but we agreed to do a how I felt at that moment. It is also agreed that in the finals I will start with a new exercise that I have not worked on so far, but again if I feel like it. In any case, I believe we will start to be 6.0 or 6.1, and it would be a lot higher rating if I do it as planned. I will need a full hall to get me up and make euphoric so I can feel better. I believe that on Saturday and Sunday we have a chance to collect the medals.

The Beam could be even better, and I hope that it will be in Koper. And with the Floor I am satisfied, I did a new exercise, it can be better, but I am happy with it. I am a little disappointed that I did not enter the finals, but the competition is quite strong, and since this is my new exercise, this is OK. Truly, I have a bit of a jet lag after returning from China I get sleepy at about five in the afternoon, but it will all come to its means. Performing in Osijek is great, I am at home, everything is great.

It was great, just as I expected. Two exercises, two finals, could not be better. This was the way I train, and I knew I would, therefore, get a decent result In Osijek I was never the first in qualifications, unlike other tournaments where I was. I am not happy about it because then there is a little more pressure in the finals, but I will not complain. I am not anxious about the Beam at all; I am in the final. The Beam is also such a device, it is exceedingly difficult to endure. Now I have the coach to see what the other girls did, and we will see if we will step up exercise for the finals. I know the hall will be full, that the audience will do their best and that it will be crazy good. I cannot wait. In the final, we all start from nothing, there is no rule.

It is all above average well in the DOBRO World Cup. Especially as far as the results of Croatian gymnastics qualifying. We have six finals, three entered the finals with the best rating in qualifying and have confirmed that they are all still in great shape.

On Saturday (May 25th), the first day of the finals starts at 3.45 pm. Aurel Benović, Tijana Tkalčec, and Robert Seligman will perform and Tin Srbić and Ana Đerek will fight for their medals on Sunday (May 26th) from 2.30 pm.